On January 11th, Facebook changed their news feed algorithm to focus on showing more content from friends and family and fewer posts from publishers. The change comes in response to Russian interference in the 2016 election, resulting in concerns over public trust and promoted content regulation. 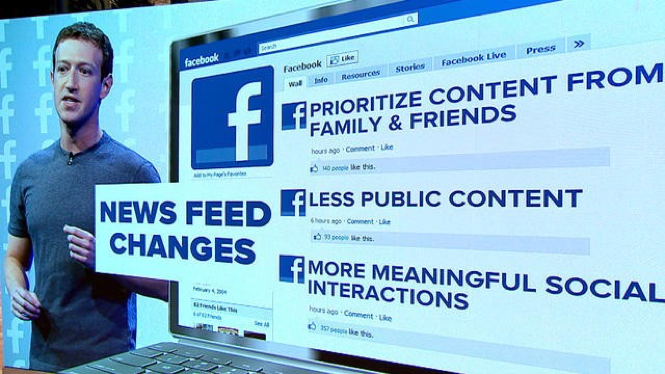 For both paid and organic content strategies, Facebook makes it clear that they want to be seen as less of a media and data platform and more as a social network.

Facebook also made this decision as an effort to be seen as a “trustworthy news source.” Online news publications like Topix, Vice, Standardnews, and Buzzfeed who rely on social media desktop views for their primary source of traffic are likely to be significantly impacted by this change.

The goal of Facebook’s “Closer Together” movement is to create a better user experience by focusing on meaningful interactions between people. Facebook is about connectivity”, says Zuckerberg “We are here to build things that bring people together.” The new algorithm sees person-to-person posts more valuable than person-to-page.

This shift will result in users viewing fewer videos and posts from publishers leading to a decrease in referral traffic. The ultimate goal is to emphasize content by friends and family rather than brands and publishers.

These new changes make it clear that Facebook no longer wants to be seen as a content consumption platform. Their goal is to help users find meaningful content, stay connected to friends and family, and help publishers build loyal audiences.

Adam Mosseri, Head of News Feed at Facebook explains that Facebook plans on shifting the value away from shares and clicks and instead promote content that sparks interactions with friends and family. This will have a major impact on marketers and publishers because they will place less values on shares and link clicks as a relevance metric.

Because of these new changes, publishers will most likely see a decrease in the money they can earn from posting branded and sponsored content. Facebook’s newsfeed change could also lead advertisers to decide that they no longer need publishers to create and distribute content for them.

Numerous other media companies are concerned that Facebook’s priority shift will cause a significant drop in online readership, leading to an overall decline in Facebook referral traffic.

Facebook’s news feed update affects what every user sees on their news feed. The latest update puts a higher priority on local news sources resulting in the likelihood of you seeing local news sources over broadly trusted ones because of the emphasis on friends and family.

Facebook used to be a useful tool for people to discover content on their newsfeed leading to increased traffic. After the change, publishers have to alter their content distribution and monetization strategy if they want to see a good outcome. Social media is essential for a successful business, so publishers and brands need to adapt to the changes. One way to make up for losses in branded-content revenue is to produce brand-funded shows for Facebook Watch or selling sponsorships into existing Watch programming.